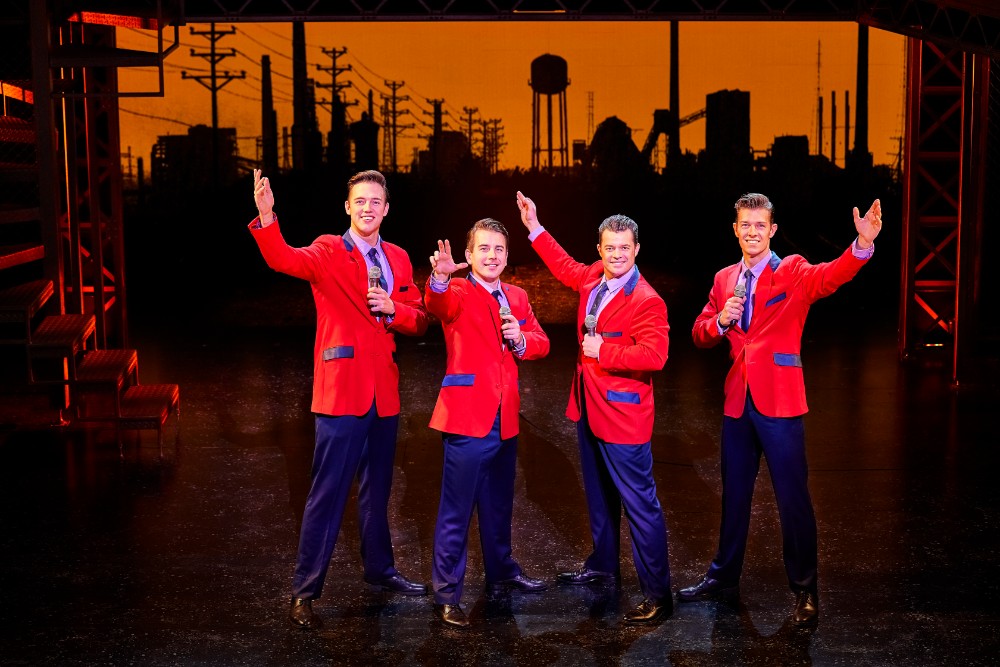 Frankie Valli Fan? You don’t have to be, but how he and the Four Season’s notorious rise to fame is a must see. It’s been seen by over 19 million people worldwide and a winner of 55 major awards. Whether its men in suits or the great choreographic sequences as they strut across the stage. Nothing can prepare you for this sixties jukebox musical experience. A true story with a procession of ballads and foot tapping greats like Big Girls Don’t Cry, Oh What a Night and Can’t Take My Eyes off of You.

A story about four lads from New Jersey who formed a singing group, where rouble was never far from their shores, prison being a revolving door for certain members like the founder Tommy De Vito, avidly played (Simon Bailey) who almost ruined the group and Nick Massi (Karl James Wilson) the bass player (both heavily involved with the mafia). Young Frankie superbly played by (Michael Watson) unwittingly shared their crime scene (under the wings of his idle the infamous Tommy) but apparently was never convicted.

The story spins through four personal accounts passing through a web of group’s insecurities, identity crisis and fractured relationships.  Big egos, jealousy love and commitment saw the young band through many failures. After an auspicious name change and the arrival of a new member Bob Gaudio (James Winter) a talented singer song-writer the band began their meteoric rise to fame with hit singles like Who wears Short Shorts, Sherry in 1962 and Walk like a man.

The audience enthusiastically took pleasure in the performances with cheers and dancing in the isles, you could almost believe the original band was playing.

Though I felt the start of the show was hindered by sound problems, it soon picked up and became an action fast paced performance with costume and scene changes incredibly slick and polished.

Having seen this musical a number of times both in the West End and at Milton Keynes this stage show was particularly magical. This was convincing performance which one felt drawn into. The scores were accomplished with brilliant musical and outstanding acting performances by all the cast love music!  I recommend you go.