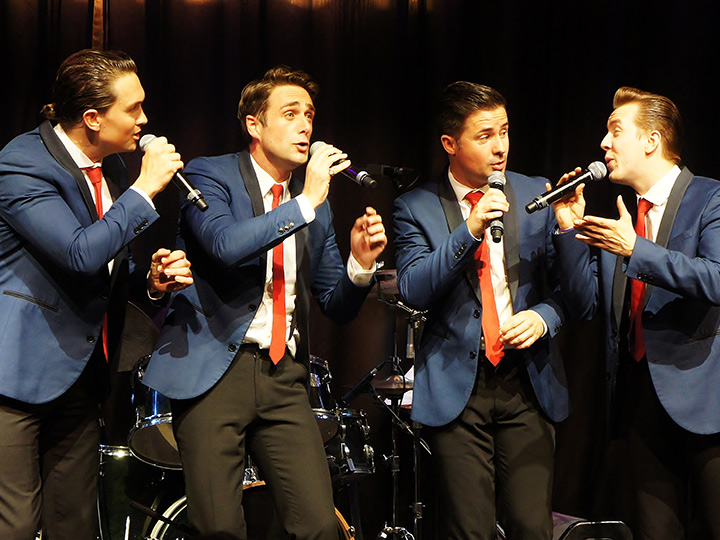 Frankie Valli Fan? You don’t have to be this International tribute to Frankie Valli and The Four Seasons, by The East Coast Boys from New Jersey, USA at the Grove Theatre in Dunstable will surely convert you. Nothing can prepare you for this sixties jukebox musical gala.10th Anniversary Tour – Celebrating a decade of Big Girls Don’t Cry featuring songs like Big Girls Don’t Cry, Oh What a Night and Can’t Take My Eyes off of You and many more. The East Coast Boys thoroughly entertained from start to finish.

Though the audience appeared a little slow to engage, by the end of the first half people were up dancing as the east coast boys strutted their stuff with great choreographic sequences. One very fortunate lady was serenaded on stage for her birthday with falsetto brilliance. The second half brought even more energy to the show with a Beatle’s rendition and a tartan extravaganza of Bye Bye Baby made popular in the mid 1970’s by Edinburgh’s phenomenal Bay City Rollers.

Wardrobes changes were seamless and swift, the localised jokes added a comedic touch of banter throughout the show.

The finale was a repertoire that included ‘Let’s hang on’, ‘Who loves you’ and ‘Walk like a man’ which had the audience dancing in the aisles and seats and screaming for more.

Having seen the musical a number of times, this tribute along with its melodic prowess and musical-rifts from all band members and the musicians was an absolute delight.