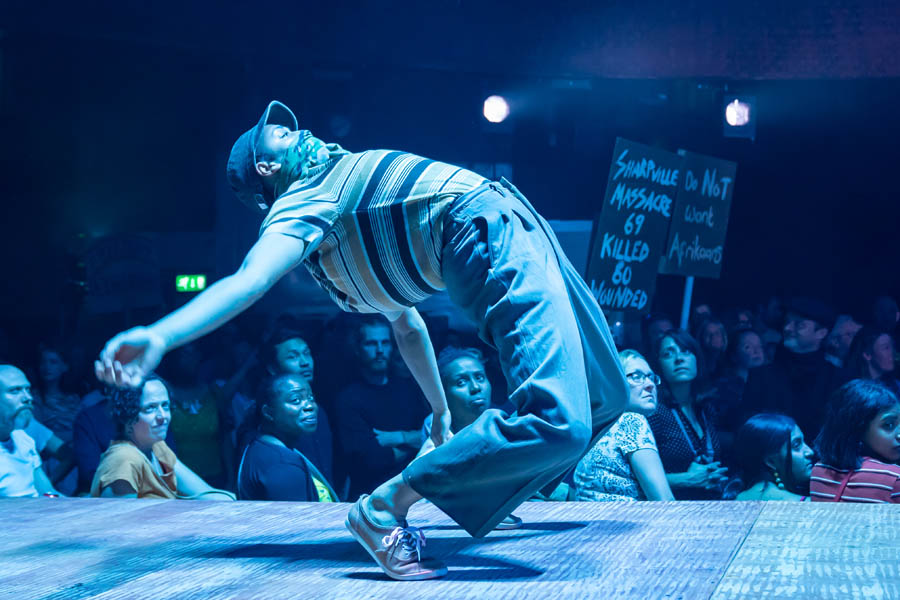 The current show TREE is a creation by Idris Elba & Kwame Kwai-Amah skilfully directed by Kwame Kwai-Amah that loosely shines a spot light on a troubled era of apartheid and subsequent struggles in South Africa. An idea of Elba’s which originates from his Mi Mandela music album, and shaped from his performance in the Mandela Long Walk to Freedom, bio account which speaks to identity injustice love loss and insight.

The doors open at the Young Vic Theatre and immediately the audience is launched into what feels like a nightclub, loud afro beats pumps out surrounding this space, a shared space with onlookers and casts members alike who become swept up in vigorous motions of dance. They perform raw movements of street, hip-hop, ballet; hearts pulsate while moving around a spherical stage with a runaway as this story begins an immersive eclectic spiritual journey.

Kaela (Alfred Enoch) a young rather conflicted mixed race man plagued by sleepless nights is torn between twocontradistinctiveworlds in the midst of the recent death of his white mother. (Lucy Briggs-Owen).

Grasping tightly the urn of her ashes he boards a flight to South Africa in a quest to unearth the truth about a father Lundi (played in flashback Kurt Egyiawan)he never knew.

At his final destination he meets a small dissonant Afrikaans woman who turns out to be his grandmother Elzebe (Sinéad Cusack) who he’s never met, and appears totally indifferent to his arrival or purpose. A stormy verbal exchange ensues and he storms off.

He comes across an aged man who turns out to be the gardener (Patrice Naiambana) of his grandmother’s land. This man has witnessed horrors and extreme sadness in the past but yet is seems hopeful for the future. When the gardener comes to realise he is Elzebe’s grandson he is both intrigued and concerned by the man’s nativity and lack of knowledge around a ‘bloody past’ and the highly charged present status of the country. He warms to him and tells Kaela “Sometimes the dead need you to find them “he evokes the ancestral spirits in a bid to help him understand. A very talented dance ensemble embodies the ancestral ghosts who vigorously yet sympathetically reveal. Kaela lies flat transfixed he dreams and visualises the deadly violence, the slaughter of black people committed by his white South African grandfather.

Fast forward he meets his rather notorious half sister Ofentse (Joan Iyiola) who finds his privileged uninformed demeanour distasteful. She’s scathing and seethes at Mandela’s ‘Pretoria Speech’ andrepudiates that position. She takes him to a political rally, where people fiercely wield anti-Mandela banners.

Flash backs and various dramatic dance routines weave the past and present together.

It is an exhilarating piece of visual artistry enhanced by well crafted choreography from Gregory Maqoma and Michael ‘Mikey J’ Asante.

Wear comfortable shoes 90 minutes of immersion is a long time.