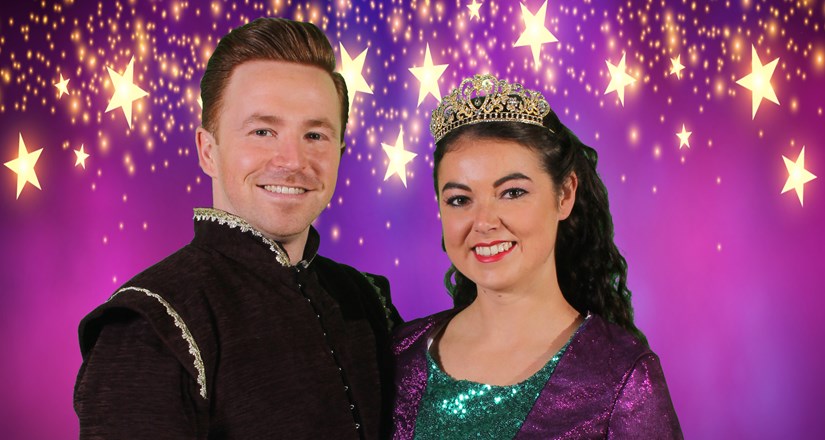 Beauty and the Beast

Stantonbury Theatre Milton Keynes features the French tale Beauty and the Beast. This version is fabulously revitalized for the whole family a talented performance of an established story and a great addition the pantomime season.

This is a classic story that aptly shows how a book should ‘never be judged by its cover’. The principle character has misjudged a situation and is cursed for this. His appearance changes from a handsome young man into an angry hairy beast, this curse can only be broken by the love of a woman.

Belle Isabelle Pardoe charmingly plays beauty, who rebuffs at every opportunity the advances of her pursuer the egotistic flirtatious, self loving Count George Oliver Longstaff, who at every opportunity views himself in the mirror he carries everywhere. After hearing the news of her father’s imprisonment in the dungeon of the beast’s castle, Belle bravely sets off to substitute herself for her father’s freedom.

Silly Simon Toby Boutall skilfully interacts with the audience and carries this show ably partnered with Simon Rhys-Jones Dame Dotty, who for me is the outstanding protagonist throughout the show, numerous costume changes witty repartee makes for his spectacular performance. Both characters swoop in and out of the audience with song dance and dodgy gags for all the family. Toby Boutall’s ‘Farm sketch’ song shows his aptitude for bringing out the best in children when on the stage.

Matthew Mcloughlin uniquely portrayed the beast, scary apertures to his mask; give him a menacing appearance which some younger children might find scary. His voice however and singing abilities particularly his rendition of ‘I dream a dream is quite majestic. Although a beast much of his performance is quite gracious as he flows across the stage.

The ensemble’s choreographic routines were lovely however I felt required more energy. The costume department excelled itself principally around the beast mask and Dame Dotty’s numerous varieties of costumes.

If you want to be taken back to traditional pantomime, this production is a must. It will have you dancing in the aisles with ‘I Can’t Stop The feeling’ singing along to ‘Baby its Cold Outside’. They’ll have you screaming at the cast members about something ‘grizzly behind them’ and jumping all over other members of the audience as you clamber for the generous amount of goodies hurled at the audience or cowering away from the mass water pistol attack in the first half by Silly Simon.