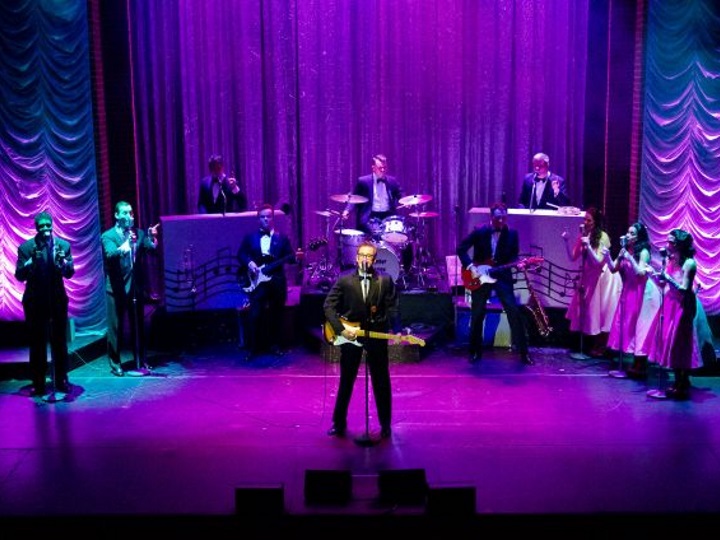 The day the music died was the night the music began in tonight’s production of the Buddy Holly Story. Alex Fobbester (Buddy) was everything I wanted Buddy to be, somewhat gauche as he began his career but growing into a confident performer. Alex personified Buddy with energy and great vocals of the hits of fifty years ago like ‘Brown Eyed Handsome Man’ ‘Not Fade Away’ and ‘Peggy Sue’ in act 1.

The narrative tells the enduring story of a young Texan lad, his awkwardness; those heavy black frames achieved exactly what he wanted; his musical determination to do his music his way sees him spectacularly rise to fame. Tragically cut short in a plane crash after his renowned performance at the Surf Ballroom in Clear Lake lowa.

A striking performance from Miguel Angel and Jordan Cunningham as the Apollo theatre performers, the choreography, timing and ambience of this piece was a great end to the first act.

If you want two hours of hit after hit including ‘That’ll be the day’, ‘Rave On’,’ Oh Boy’, ‘Johnny B Goode’. Join the cast for a ball you’ll be literally boogying beside your seats during the finale.

I felt the lack of stage props at times made the story disjointed, however it invigorates a strike of nostalgia which grabs those memories from way back and orders those appendages to move.